Currently a Research Director and Deputy Director at the Singapore Centre for Environmental Life Sciences Engineering (SCELSE) and a professor of Environmental Genomics at Nanyang Technological University, Singapore. As well, he is a founder of the GenomeAsia100K consortium, and acts as its scientific director. Since the mid 1990’s, Schuster, together with collaborators at various academic and commercial international institutions, has demonstrated the transformative impact of genomics on the Life Sciences, in particular through next-generation sequencing technology (1,2,3).

Schuster completed his primary through tertiary education in Germany. After studying chemistry at the Technical University Munich and the University of Konstanz, he graduated with a Ph.D. in Biochemistry from the Max-Planck-Institute for Biochemistry / University of Munich. For his postdoctoral training with Melvin I. Simon, he moved to the California Institute of Technology.

Schuster held group leader positions at the Max-Planck-Institute for Biochemistry (1994-2000) and the Max-Planck-Institute for Developmental Biology (2000-2004). In 2004, he accepted a Professorship of Molecular Microbial Ecology at Penn State University, in the Department of Biochemistry, Microbiology and Molecular Biology (BMMB). While at Penn State University (2005-2014), he was a member of the Center for Comparative Genomics and Bioinformatics, and the Center for Infectious Disease Dynamics.

In 2011, he became a founding member and Research Director at the Singapore Centre for Environmental Life Sciences Engineering (SCELSE, a MOE and NRF-funded Research Centre of Excellence, while holding a professorship in Environmental Genomics, in the School of Biological Sciences (SBS, at the Nanyang Technological University, Singapore (NTU. Schuster serves currently as a Deputy Director of SCELSE. In 2018 he was awarded the President’s Chair in Genomics at the Nanyang Technological University, Singapore.

In 2016, Schuster and Mahesh Pratapneni, with support from the Nanyang Technological University, EmergeVentures, Medgenome, and Macrogene, founded the GenomeAsia100K initiative, which sequences human genomes from Asian human populations.

The impact of Schuster's work is noted via contributions in the fields of microbiology and genomics. He is included as one of the top 2% of most influential sceintists in 2019, according to an annually compiled list published by Stanford University. Schuster is also recognized as a pioneer of the next-generation sequencing (NGS) era, after having published a landmark study in ScienceExpress on 20th December 2005 on “Metagenomics and Paleogenomics of mammoth remains,” which was re-published in Science magazine in spring 2006 (4). This study followed the company 454 Life Sciences’ demonstration of emulsion PCR / pyrosequencing technology in September of the same year (5) and as such represents the first example of addressing a biological problem with NGS technology. Applying the emerging NGS technology to ancient DNA research, together with the use of novel DNA reservoirs (hair) (6), eventually led to the field of paleo-population genomics. This enabled the comparison of 18 complete mammoth mitochondrial genomes (mt genome) to those of a single Indian and single African Elephant mt genome sequence (7). The largely expanded sample number of specimens from an extinct species allowed studying mammoth populations across a time frame of 50,000 years (7). Using the same approach, the first sequences of an extinct marsupial were generated, thereby demonstrating that now extinct species display a reduced genetic diversity before their demise (Tasmanian Tiger, (Thylacinus cynocephalus); Tasmanian devil, (Sarcophilus harrisii)) (8). The genomics analysis of museum specimens was a further adopted to avian species, such as the Moa (9), thereby opening new possibilities for the use of vast collections in national archives for paleo-population genomics studies. The emerging field was coined by Schuster as “Museomics”, referring to museum genomics (10,11,12).

The efforts of Schuster and his main collaborator, Webb Miller, eventually led to the first genome of an extinct species, the mammoth genome, published in Nature magazine in 2008 (13). The research triggered a large media echo globally (14), as news media began speculating about the imminent resurrection of a woolly mammoth (15). This undertaking has not been accomplished to date, despite various attempts to clone genetic material from permafrost frozen tissues or to edit genomes from Indian elephants (16).

The concept of analyzing extinct and extant genomes using NGS technologies were further explored by Schuster, Hayes, Miller and collaborators through a project that sequenced two Tasmanian Devil genomes (Cedric and Spirit) together with several museum specimens (19). This enabled the genotyping of the Tasmanian Devil population, thereby revealing the remaining population structure (20). The work eventually led to the concept of informed breeding for species conservation (21). Further work with collaborator Lindqvist included the sequencing of the first published polar bear genomes and unravelling the species’ recent population history (22,23).

In 2010, Schuster, Miller, Hayes and a global team of collaborators extended their genome analysis efforts to humans. In a study, they described the sequencing and comparison of genomes from Khoisan ethnicities, southern African hunter-gatherers in Namibia, as well as the genome of Archbishop Tutu, a representative of south African Xhosa and Motswana ethnicities (24). At the time of publication, only 8 human genomes had previously been published. Later population genetics analysis (2014) showed that the hunter-gatherer populations of Namibia, Botswana and South Africa represent the oldest living human ethnic groups, as well as being the largest population in terms of effective population size throughout modern-human history (25).

Before entering the NGS era, Schuster sequenced bacterial genomes, with Wolinella succinogenes being of note as the first genome of a bovine rumen bacterium (2003) (27), and Bdellovibrio bacteriovorus, representing the first bacterial predator genome (2004) (28). The novel understanding the organisms’ molecular tool kit, termed predatosome, a collection of proteases and lyases, renewed interests in this class of predatory bacteria as living antibiotics.

Parallel to his work on microbial genomes, Schuster and his team also contributed large-scale sequencing data of BAC clones to the zebrafish genome project led by the Sanger Center (29). At the beginning of his career, Schuster’s scientific interest was centered around bacterial motility and signal transduction (30,31).

Based on his previous work in ancient DNA, Schuster advanced the fields of environmental genomics by developing ultra-low biomass protocols for NGS sequencing (32). By establishing robust and automatable protocols, he and his research team were able to conduct large environmental surveys on the microbiome of house and blowflies (33).

Within a 5-year MOE funded project, Schuster’s group developed an approach to sequence DNA from air with high temporal and taxonomic resolution. This led to the discovery of the diel cycle of airborne microorganisms, which revealed that tropical and temperate air is more similar in its microbial composition between days than between day and night times (34, Drautz). The translational outcome of this research included respiratory health studies of various clinical cohorts (35).

The methodological developments for studying the air microbiome presented an ideal starting point for environmental surveys during the Covid-19 pandemic, as it allowed Schuster’s team to deploy large numbers of air samplers in the Singapore built environment, while demonstrating that SARS-Cov-2 is detectable in air samples (36,37). The developed air surveillance technologies were instantly deployed in medical settings, leading to studies aimed at the protection of medical personnel (37,38,39). 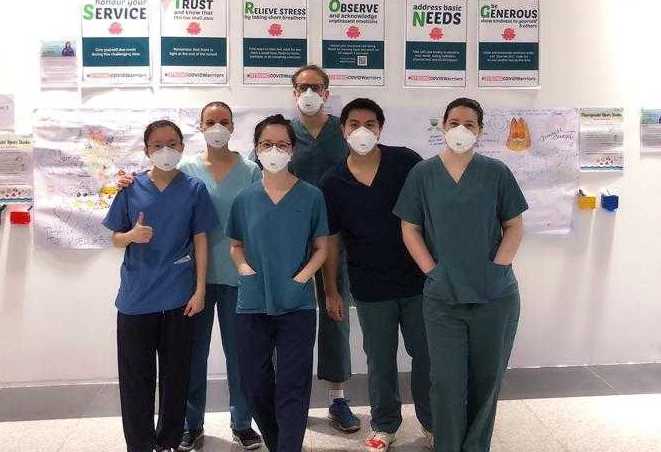 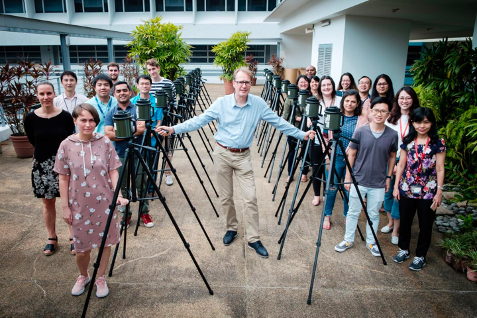 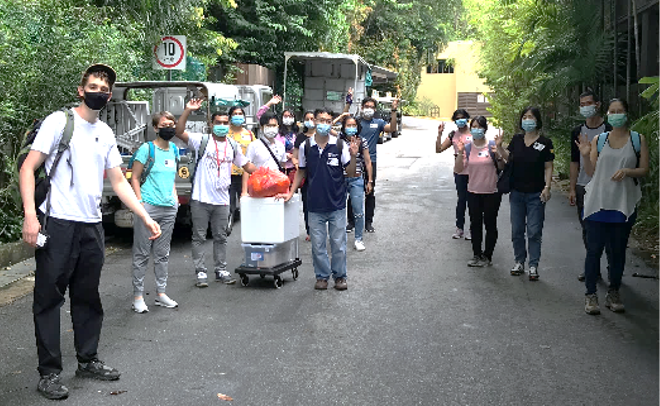 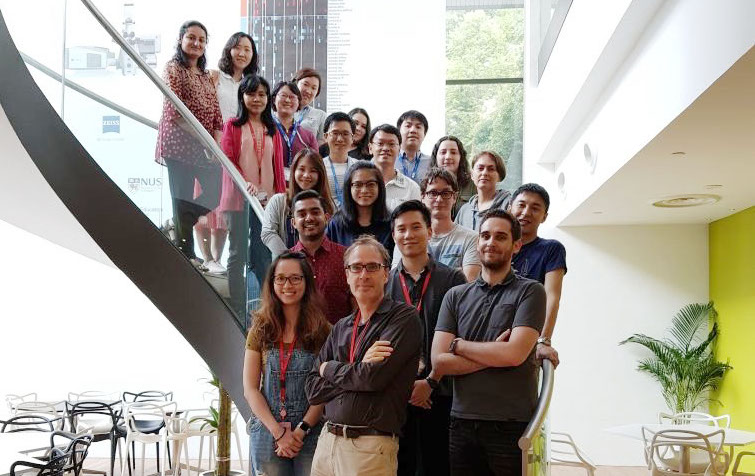 Gathering for a team photo after a shared holiday get-together